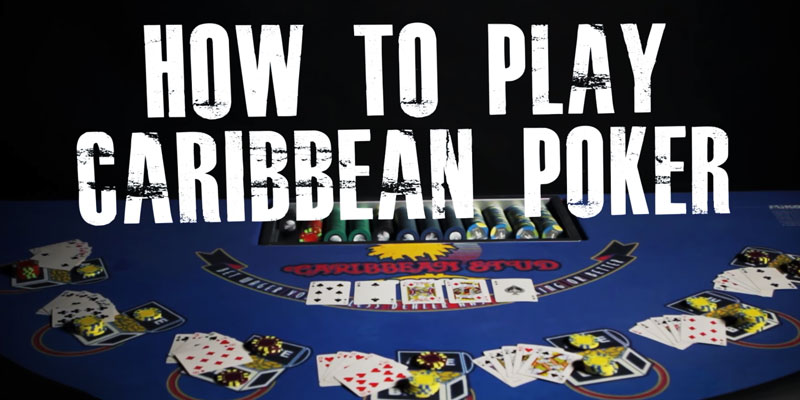 Poker is one of the most popular table games both at traditional brick-and-mortar casinos and their virtual counterparts. Assuming you are a gambling aficionado who has a taste for poker, you have probably played the game many times. Additionally, you are most likely aware of the fact that there is a vast number of poker variants. Knowing how to play one of them does not necessarily make you an expert for the other ones.

That being said, if you have ever engaged in a game of Five Card Stud, which is among the most common variations of poker, you will have no problem learning how to play Caribbean Stud Poker. The two variants resemble each other greatly, even though the latter has a fancier name. However, in spite of all the similarities, there are certain features that are characteristic only for Caribbean Stud Poker.

Among the most prominent in Caribbean Stud Poker are the absence of bluffing and draws. In addition to that, the fact that you always play against the house, and never against other players, makes it stand out. Aside from those differences, the game of Caribbean Stud Poker is essentially a game of Five-Card Stud. You have most likely played the latter with members of your family or your friends.

Regardless of the assumption that you are probably familiar with all the rules, I will guide you through the process starting from the basics, and then go into the details. If you are eager to play this variant of poker and would like to know how to profit from the experience, read the text that follows.

Caribbean Stud Poker: Interesting Facts and an Intro to the Learning Process

Not only is this game entertaining and thus appealing to many a poker enthusiast, but it is also one of the most fruitful variations of the game. The Caribbean Stud Poker Optimal Strategy lowers the house edge to around 5%. That is why you have the highest chance of winning when you play this variant.

You can play a game with a lower house advantage only if you play Blackjack or Craps. However, Caribbean Stud Poker remains a more profitable option. This game can deliver payouts that are significantly larger in comparison to the two cited games. 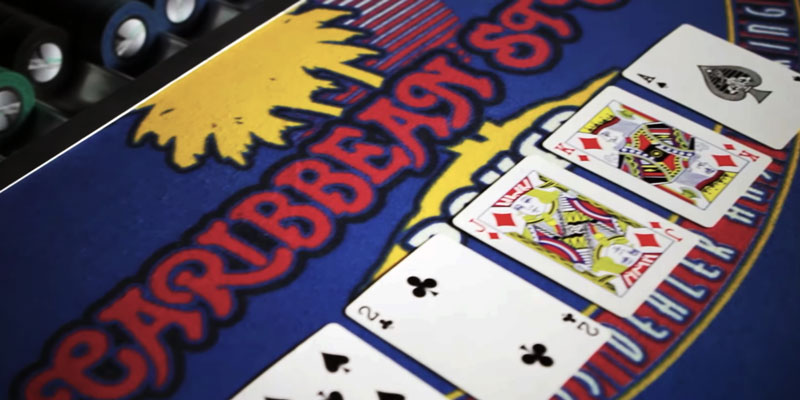 In order to make the most out of the opportunities this game offers, you need to learn the rules first. Once you do that, you can develop a strategy based on everything you know. Moreover, you ought to be aware of the mistakes players frequently make, so that you are able to avoid them. Fortunately, this text will provide you with an insight into that aspect as well.

The Course of the Game

The two main features that make Caribbean Stud Poker different from other variants of poker is the already-mentioned opponent, the house, and the fact that the game lacks community cards.

Players gathered around the Caribbean Stud Poker table play the ante game exclusively. Therefore, they place their bets before they get to see their cards, which means that dealing takes place after betting. Once they have all wagered, they all get five cards face down, and the game is about to commence. You ought to be careful at this point. You will have to double the ante in order to keep playing once the cards have been dealt. Therefore, make sure not to bet over the top. In case you do, you will have no way of staying in the game.

The dealer delivers five cards to each one of the players, including themselves. The only difference is that their hand contains an upcard, which is visible to everyone at the table. Once the dealing round has finished, you have two options. You will either fold and give up your ante bet, or up the ante by placing the bet twice as big as your original one in order to call. Since you will be able to see only one out of five cards the dealer has, calling requires you to presume that your hand is a higher-ranking one in comparison to theirs, or that they do not have a qualifying hand. In order to qualify, the dealer has to have an Ace-King at least.

Now, there are three moves you can make, depending on both your hand and the dealer’s hand.

In the first-case scenario, the dealer qualifies, but your hand is a higher-ranking one in comparison to theirs. As a result, you are delivered a payout according to the payout table which is based upon the strength of your hand.

In the second-case scenario, their hand is weaker than an Ace-King, and thus does not qualify. You and the rest of the remaining players beat the dealer. Subsequently, you are paid back an amount of money twice as big as your ante bet.

In the third-case scenario, which is the worst-case scenario at the same time, the dealer has a qualifying hand that is better than yours. If, and when, this happens, you lose both your bets and the game is over.

As you can see, the rules of Caribbean Stud Poker are rather simple. Unfortunately, that is precisely the reason many players lose when playing it. They take the game too lightly and disregard the importance of developing a proper strategy. Luckily for you, they have made mistakes, so you will not have to, since you can learn from theirs. I am about to list the most common mistakes inexperienced players unknowingly make. They will provide you with information that can help you pay attention during the game, develop your own strategy, and ultimately win a game of Caribbean Stud Poker.

Base Your Winning Strategy on Mistakes Others Have Made

You can make the first mistake right at the beginning, if you presume that knowing how to play another poker variant can lead you straight to the winning position at the Caribbean Stud Poker table. Knowledge from the area can help, but a learning process is required to achieve the goal defined in the title.

As I have previously stated, people have made such mistakes before, and thus unknowingly provided you with learning material. I will list the said material in the form of advice based on faulty moves you are likely to make even as an experienced player of some other variation of poker.

Let’s assume you are playing a game of Texas Hold’Em Poker and you get a low-ranking hand, such as a pair of deuces. Since in the cited game you play against other players, you are most likely to opt for folding. If you engage in playing Caribbean Stud Poker with that attitude, you will commit the most basic mistake. This is exactly what I was referring to when I mentioned that you should not presume that playing one poker variant automatically makes you prepared for all of them.

You need to remember two things in order to avoid this particular landmine. First of all, you are playing against the dealer, period. Other players and their cards do not matter. Second of all, the dealer needs to fulfill the requirements I have already elaborated on to qualify. Therefore, you may even have a lower-ranking hand than them and still manage to outplay them. Not only is this variant more profitable thanks to the Caribbean Stud Poker Optimal Strategy, but it is also simpler in terms of the rules.

Be Careful Around an Ace-Queen and an Ace-King

An Ace-Queen is a high-ranking poker hand, on the condition that you are playing Omaha Poker or Texas Hold’Em Poker. In this variant of the game, however, it does not have to be that way. Always keep in mind that the dealer already has at least an Ace-King if they have qualified. Therefore, the standard hand ranking does not necessarily have to apply in a game of Caribbean Stud Poker.

Given the fact, if you are dealt an Ace-Queen, you ought to fold right away instead of taking a risk. In the case of an Ace-King, however, the situation is not as simple and requires some elaboration from me and some planning from you, when the actual game takes place.

Essentially, you need to pay attention to the remaining three cards in an Ace-King and base your decision on them. For example, if you have an A-K-Q or an A-K-J, you are safe to raise, since your hand contains blockers that enhance your chances of outplaying the dealer. You also have high chances if you raise once the dealer has shown a card that ranges between a deuce and a Queen, on the condition that your hand features the same one. 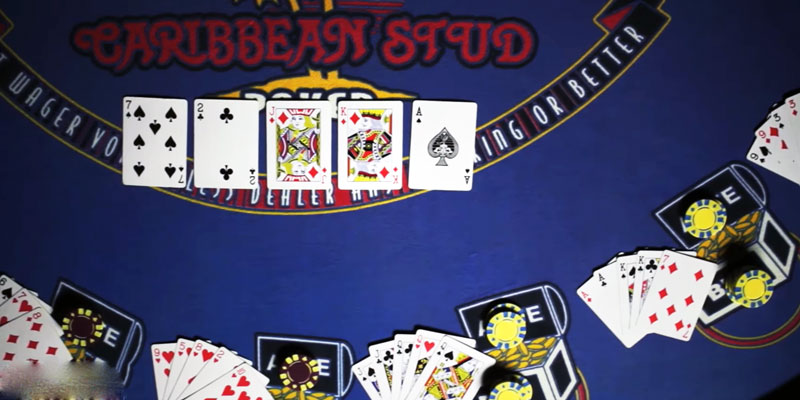 Finally, you have the highest chance of having the strongest Ace-King if the dealer’s upcard ranges between a deuce and a five, and your hand features A-K-Q or A-K-J.

Winning the Progressive Jackpot: Yes or No?

All the pieces of advice I have shared with you so far are significant for developing a strategy and bringing the house edge down to 2.3%. Discussing the progressive jackpot is even simpler than that. The subject is rather straightforward and only requires you to estimate the situation correctly and ultimately decide which way you want to go.

First of all, I highly advise you never to lose focus. Always keep in mind that the amount of money the progressive jackpot can bring is great because the odds are low. Many players get greedy and disregard that fact, which frequently leaves them empty-handed.

There are three cases in which you ought to ignore the progressive jackpot and should not let yourself be tempted by it. If you are playing the game for fun, you do not need it, so just forget about it; if your bankroll is limited, you cannot afford to lose much money, so do not take such a high risk; if your bets are important to you in a way that you feel like you owe it to yourself to win them back, focus on them instead of considering the progressive jackpot.

Nevertheless, if you do not recognize yourself in any of those categories, and you happen to be a responsible gambler who approaches the game seriously, the Caribbean Stud Poker progressive jackpot may be your ultimate goal.

In case you decide to go for it, you have to sit as close to the dealer as possible. The reason is simple. If more than one player wins it, the one that is closest to the dealer collects their payout first. For instance, if a player has a royal flush, and another has a straight flush, the latter receives only 10% of the whole progressive jackpot amount. The way you can avoid getting into such a frustrating situation is to play the game at an online casino. At virtual venues, you play against the dealer, but without the other players. That means — if you win the progressive jackpot, its entire amount is yours.

If you opt for playing Caribbean Stud Poker at an online casino, remember to pay attention to the paytables. However, do it only once you have established that the website is legitimate. Check whether it is licensed by a reputable jurisdiction, and whether its terms section does not contain any suspicious clauses.

As you have had a chance to see for yourself, Caribbean Stud Poker is a simple, entertaining, and profitable game. However, it can become rather tricky if you take it lightly. By that, I mean not paying attention to the differences between it and other poker variants. Before you engage in playing this game for real money, whether at a traditional or an online casino, play it for fun to make the whole process natural to you. Concentrate on your own goals and do not allow yourself to get carried away by the game. If you carefully consider all your options and give the game the credit it deserves, you may profit from it.