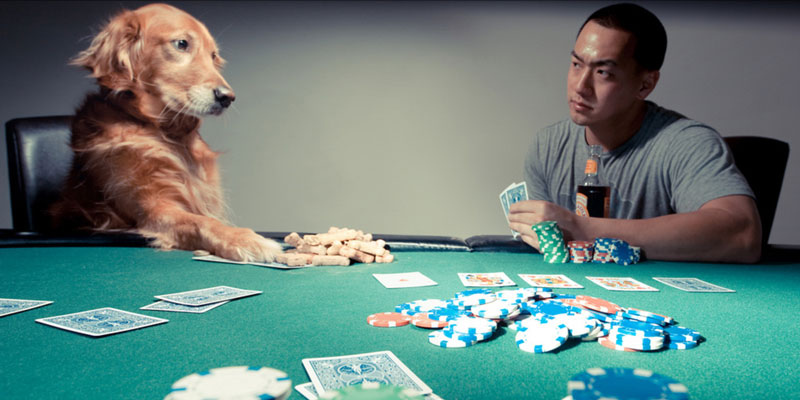 Over the years, poker’s become synonymous with gambling in general. Only pokies can rival its popularity. The difference between these two casino games is the involvement of the player in the way game pans out. Pokies are a game of chance — they work with software that you can’t influence, no matter what you do.

On the other hand, a poker player has a lot of strategies to utilise. Sure, you need to have the luck of the draw, but ultimately, it’s a game of skill and experience. It takes years of practice to play the game at the highest level, and the more we play, the better we’re at it. But we all have the same starting point.

The basics of poker are simple — that’s what makes the game so popular. However, if you want to go pro, you need to learn when to make which play. That takes time, so you should be persistent. Losing sessions are indeed discouraging, but you should focus on the long term goal in the same manner, as stringing a couple of wins together doesn’t make you a master at the game.

There are several different variants of poker that have developed over the years. But before we go into the particularities of some of the most popular ones, let’s talk about the rules first.

With the exception of those poker variants that include wild cards, all poker games have 10 possible hands you can hold and how you value them is universal. We’ll now go through them, starting from the weakest hand:

In order to be able to play the game efficiently, you need to know these hands by heart. When starting out, we advise you to have a copy of this list next to you, so you know which hand you have. With experience, you won’t be able to tell only your strength, but you’ll be able to anticipate what your opponents might have — that’s the aim of the game.

Now, let’s discuss what goes on during the game. We’ll talk about Texas Hold ‘Em, as that is the most popular version of poker. If you’ve ever watched poker on TV, they were probably playing Texas Hold ‘Em.

In the beginning, two cards are dealt to each player and only they can see them. We call them hole cards. That’s the start. After that, there are three rounds of card drawing, during which the dealer puts five cards in total on the table for everyone to use. They are known as community cards:

After each round of draws (starting with you getting hole cards) there’s a round of betting. During betting, there are four different actions you can take — call, check, fold, or raise. If you want to add more money to the pot (and try to make other players fold), you raise the bet. When someone raises before you (or re-raises your bet), you can fold, which means that you turn over your hand and leave the game. Alternatively, you can call them by matching their bet. When there’s no raise involved, you have the option of checking. Basically, you don’t do anything and the betting moves on.

The game finishes when everybody but one folds. Another possibility is that two or more players go all the way — they’ve made the same bet after the fourth and the last betting round. When this happens, the player with the best cards wins.

One more popular instalment of the game is Omaha Hold ‘Em. As you might have guessed from its name, Omaha is very similar to Texas Hold ‘Em. Players get their hole cards, and there are three rounds of community cards dealings.

The major difference is that you receive four hole cards, meaning that, in the end, you have a selection of nine cards to choose from. But beware — there’s a trap for the newcomers. In your five-card hand, you have to use two of your hole cards and three community cards. So if you pocket four Aces, don’t go all in just yet. Sadly, that doesn’t mean you have Four of a Kind in the game.

Apart from that, there’s Seven-Card Stud Poker. In this variant of the game, each player receives seven cards, with three of them facing down (only you can see them after the final betting round). After you’ve done with betting, you use your cards to make a combination. Also, you use four of the opponents’ cards you can see to estimate whether you can beat them or not.

If you learn these three games, you’re pretty much covered. Some professional players go through their career with playing only one variant. But if you’re an inquisitive fella, Three Card and Pai Gow Poker are another two of the more frequently played ones.

The first thing you need to learn is when to walk away. Don’t get too attached to your hand. You can have a Full House, and that’s great, but you need to learn how to make an observation of the community cards. What are the odds of the other guy having a Straight Flush? Calling every bet is a surefire way to lose all your money. Folding at the right moment is what makes the difference between a newbie and a pro.

If you’re just starting out, please fight the urge to bluff. Yes, it’s amazing, and it’s what movies talk about, but you won’t do it well. In the beginning, you’ll probably face players of the same experience, and new players tend to call pretty much every bet, which renders your bluffing ridiculous. On top of that, there are different playstyles — you can be passive, aggressive, loose, or tight. You need thousands of games under your belt to develop a style, and being consistent is key to successful bluffing.

Here’s some good news though — if you’re playing online poker, you’ll get the hang of it easier. There’s no body language for the opponent to deduce your hand off of, and you don’t have to spend ages working on your poker face.

We’ve told you how the game works — now it’s time for you to make it on your own. Remember, always remain calm and in control — don’t bet when your ego’s hurt after a big loss. Be tenacious and work on your game. Good luck, and don’t forget us when you win your first million!